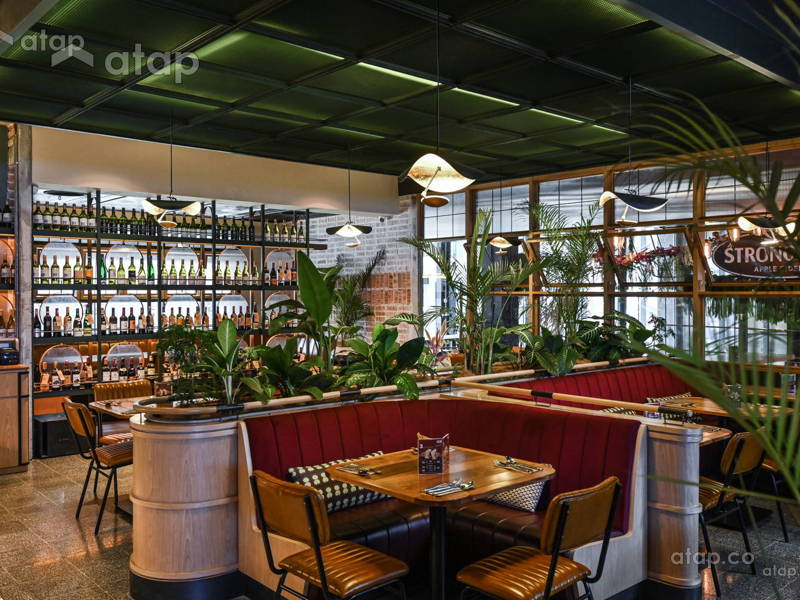 It’s All In The Details: Blending Old and New Elements

by Lydia Lohshini on Jul 3, 2020
0
LOVE
Share on FacebookShare on TwitterShare on Google+Share on PinterestShare on Whatsapp
Why you should care

Take a peek into the interior design stylings of the Smores Restaurant and Bar in Jaya. This space takes on a maximalist style that perfectly balances industrial themes with retro elements.

The team behind the retro-chic Hop Beer Bar in Jaya One are also the folks who gave the Jaya One outlet of Smores Restaurant and Bar a major facelift. With a fun and relaxed ambience, this space has become a hub for patrons since its doors opened. We spoke to Rebecca Chan, the co-founder of Pivot Studio about the transformation that took place.

The interior designers explained that the client brief was given with Smores Restaurant and Bar was to give the outlet a breath of fresh air. “They wanted a fresh and contemporary interior design that would draw in a younger crowd and families. They also expressed how they wanted to be a place that’s not just to eat at but also an interactive space with the bar and an exposed kitchen.” Rolling with the clients brief, the team at Pivot Studio began conceptualising ideas.

However after much thought, instead of giving the outlet a 180-degree transformation, Pivot Studio opted to blend the restaurant’s old concept with a fresh new update. As Smores Restaurant and Bar had already established their brand identity through the years, Pivot Studio only saw it fitting to curate a space that would still be recognised by frequent patrons. So instead of forming an entirely new concept, they decided to carry forward elements and materials from other outlets towards this new space. The space featured existing raw, rustic, and industrial elements that gave the outlet a very futuristic industrial feel so Pivot Studio decided to add retro-elements to balance out the theme.

Similarly, with Hop Beer Bar, Pivot Studio state that the two outlets share common types of materials and furniture as they are situated just opposite each other in Jaya One. By doing so, the interior designers created a connection that encourages interaction between these two spaces. The interior designer says “HOP was inspired by the boom of craft beer brewing industry, which made the 12-ft long self-service chiller its focal point.  As for Smores, being an existing brand, it was crucial to maintain some of its brand identity, mainly the raw and rustic design language but focus placed on the combination of ambiences between dining and bar.”

Explaining the design, the interior designer noted that as Smores Restaurant and Bar was to be a standalone unit in the corner of the establishment, the unit needed to be loud in terms of colour to attract attention while maintaining a sense of subtlety to ensure a comfortable dining experience. It was also important for the design of the space to smoothly transition from daytime to nighttime, allowing guests to have an array of dining experiences.

As patrons enter the outlet, the alcohol display behind the bar becomes an eye-catching focal point, Pivot Studio explains the reasoning behind this design idea, “Smores bar was designed to stand-out as a means of wayfinding. Reason being, the outlet, in fact, has multiple entry points, but the bar should be the main entrance for customers to enter the restaurant and it is also a point of decision-making, whether to decide on having a drink at the bar side or simply just dropping by to have a dine-in meal.”

Apart from the stunning display at the bar, another feature that is sure to attract your attention is the illusion of higher ceilings This was done by utilization of 2’x4’ lighting egg-crates on the ceiling as a highlight above different dining areas. Below, the lights highlight the retro feel of the space, from geometric tiles to old-school leather seating. In order to give a softer tone to the overall retro and industrial vibe, the interior designers introduced various plants into the mix.

On paper, the addition of these various elements could somehow seem cluttered and chaotic but in reality, Pivot Studio has masterfully created a maximalist project that is both eye-catching and cosy. Pivot Studio states that the key to curating a space that features various themes and elements is to have a combination of hard and soft materials, “Soft materials provide the breathing space for the interior experience, whereas hard materials create that eye-catching factor in an interior. For example, having a concrete dot on a soft velvet fabric background. The softness in velvet accentuates the solidness of the concrete dot.”

Truth be told, we are very much impressed with how Pivot Studio designed two very separate spaces that have a way of looking both similar and different from each other. This is most definitely a hard task to complete but looking at both Smores Restaurant and Bar and Hop Beer Bar, we are convinced that these designers know exactly what they are doing.

Take a peek into the interior design stylings of the Smores Restaurant and Bar in Jaya. This space takes on a maximalist style that perfectly balances industrial themes with retro elements.