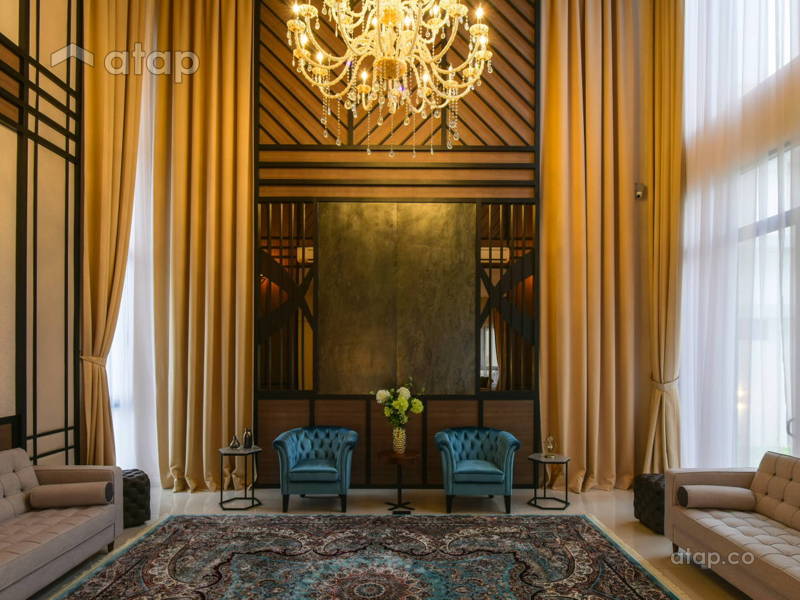 Diving Into the Design: A Home for Entertaining

by Charmaine Kon on May 22, 2017
0
LOVE
Share on FacebookShare on TwitterShare on Google+Share on PinterestShare on Whatsapp
Why you should care

This exquisite bungalow in Kuala Lumpur, Malaysia was inspired by the ornamental attributes of the art deco movement. We interview with Ameera Nabeela from Moonlit Inspiration, the brain behind this retro bungalow.

A living space without a television set, just like the good ol’ kampung days.

Graphic black lines run diagonally on the backdrop of the living space, forming a chevron pattern above a distressed bronze mirror. The pattern draws the eyes all the way up to an equally ornate ceiling, with the same black lines now forming a chequered pattern on wood, more mirrors, and the pièce de résistance, a chandelier that looks like it was plucked right out of a grand ballroom. 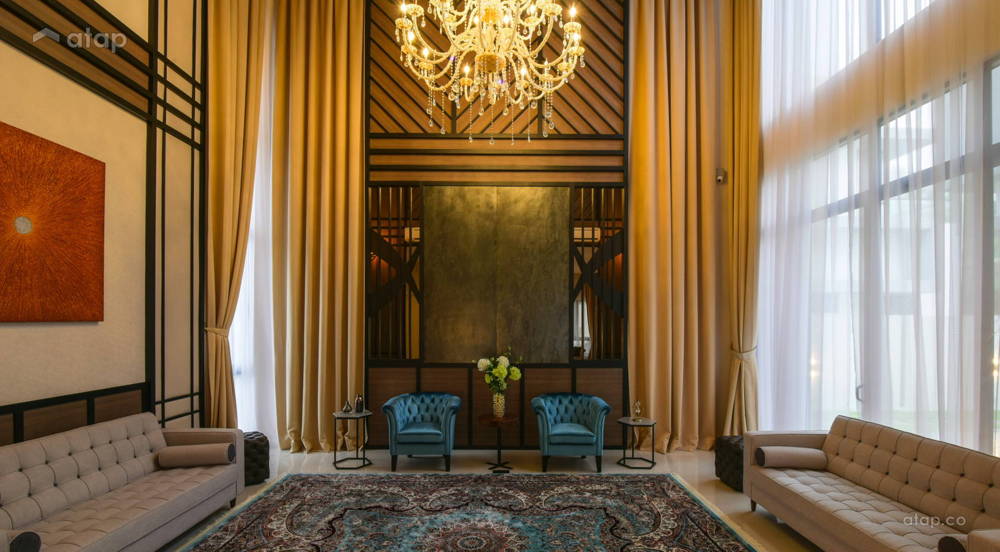 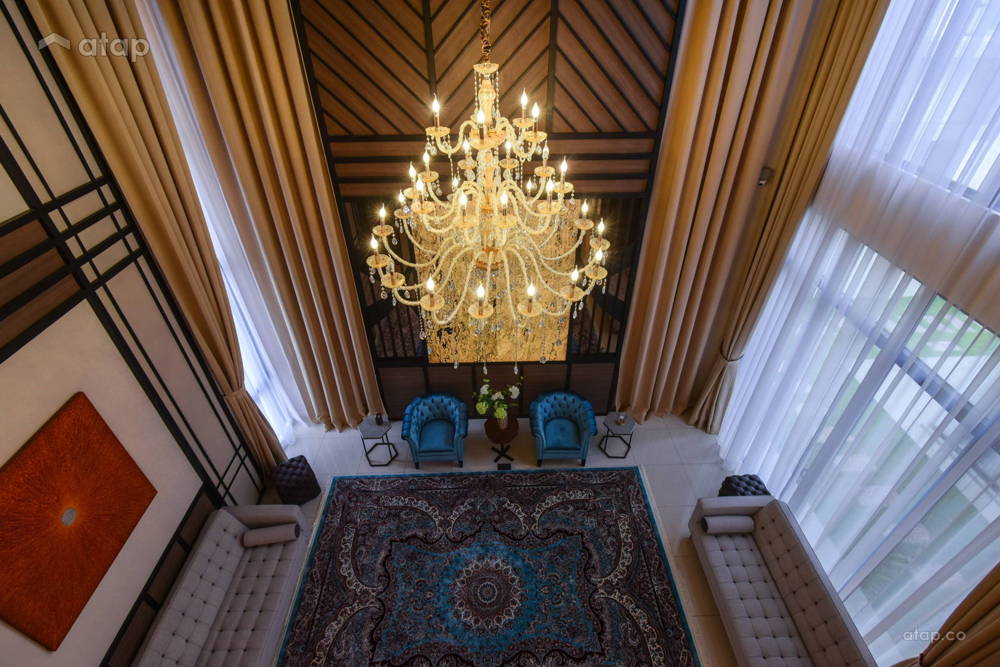 It’s hard to decide which wall to settle your eyes on, what with more of that graphic black lines interspersing with fabric panels and a large piece of art on one other wall, and lux ceiling-high curtains on the other wall. The room, interior designer Ameera Nabeela of Moonlit Inspiration says, is inspired by art deco, an architecture movement that first surfaced in the 1930s.

Nostalgia isn’t just in the room design, it’s also in its spirit.

Speaking to the owners, a young family of four, the designer realised that the owners wanted a room where family and friends from could gather, especially during Raya. This explains the traditional patterned carpet, large neutral-coloured sofas, and striking blue velvet armchairs. 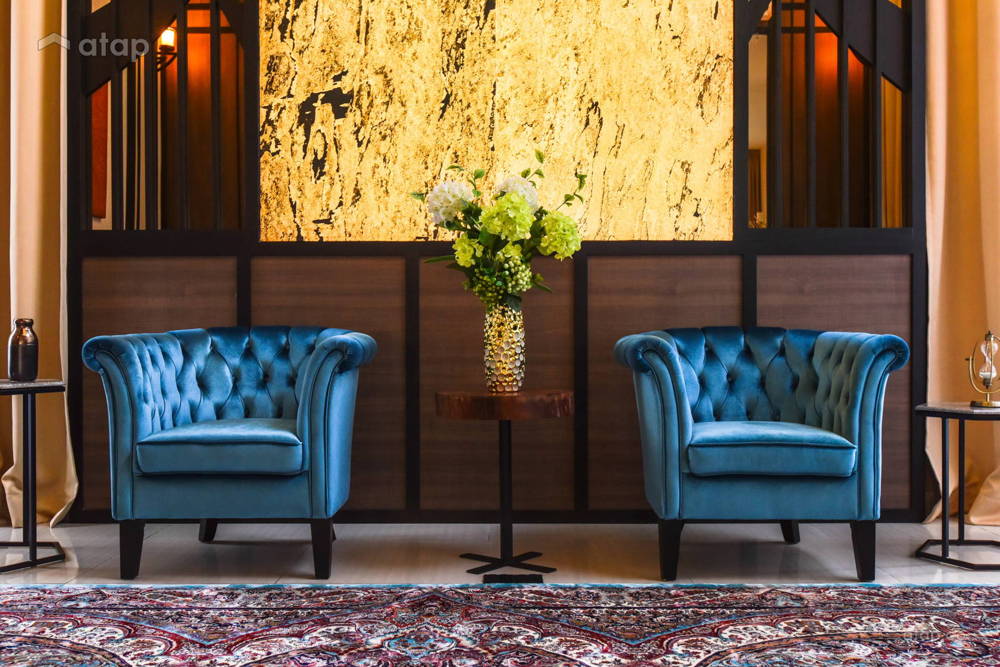 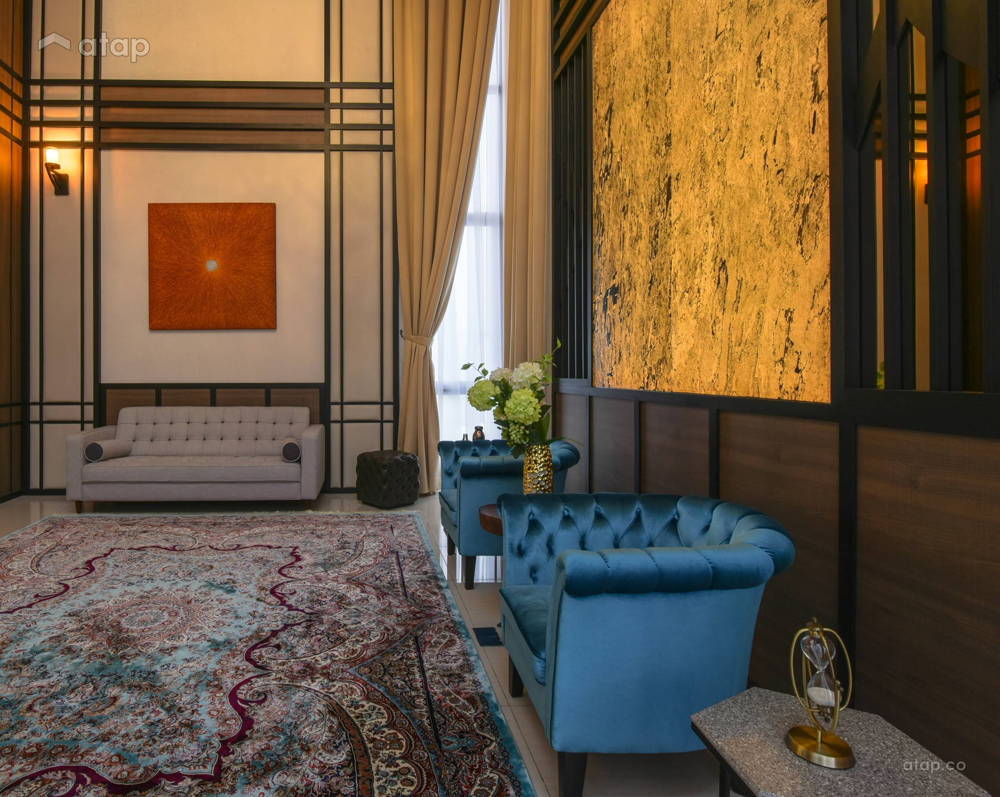 As conversations were to be the main event in the space, the designer cleverly left the TV and other electronics out of the room’s design. The electronics are housed in a smaller room next door, a dedicated entertainment room.

The combination of wooden and fabric panels continues in the master bedroom, another standout space in the home. The walls were designed with square-framed bead boards on the top three-quarters and timbre wood panels for their remaining lengths. 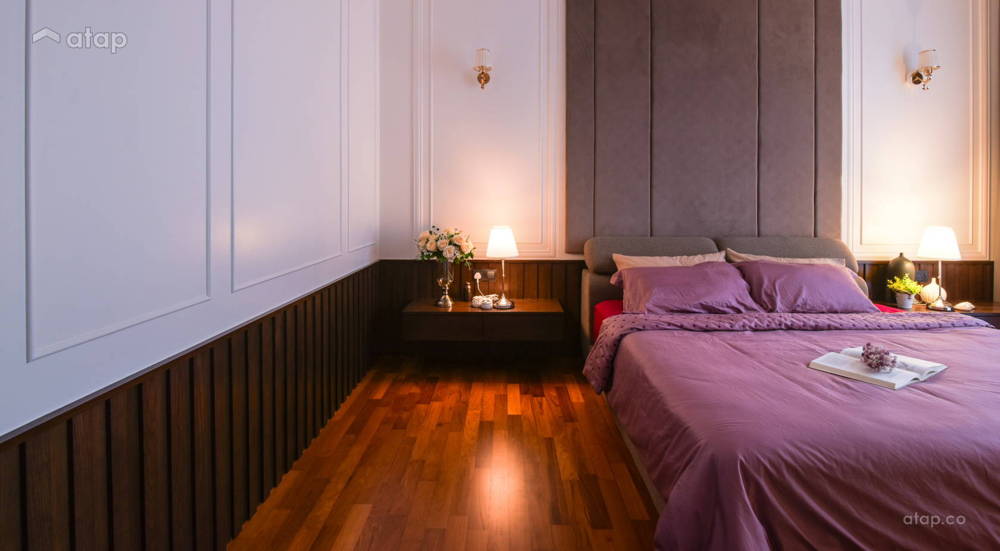 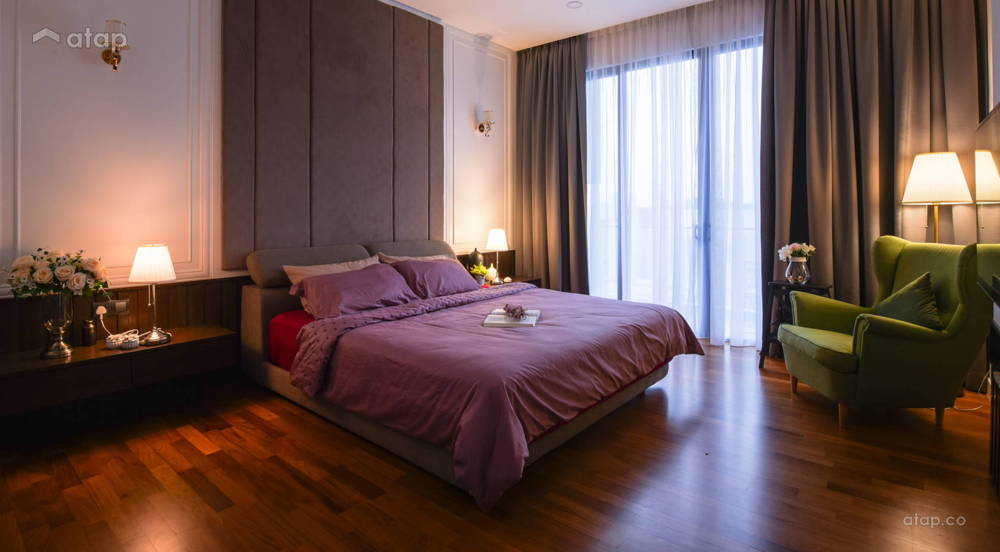 To soften the colour contrast between the white and dark wood, grey velvet panels were placed behind the bed, matching the grey bed frame seamlessly. The in-built timbre wood side tables blend into the timbre wood walls, creating storage without taking up more visual space. 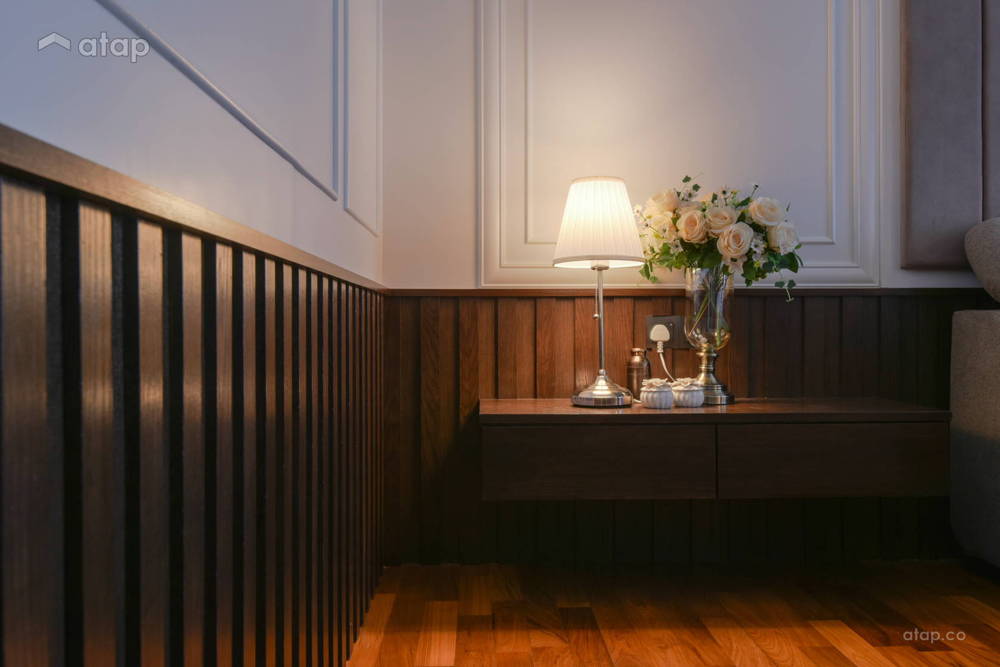 In contrast to the more retro living and master bedrooms, the kitchen boasts a contemporary design. Greyish blue cabinets with golden handles steal the show, while the white marble counter and the white hexagon backsplash contribute pattern and texture without competing with the colour of the blue cabinets. 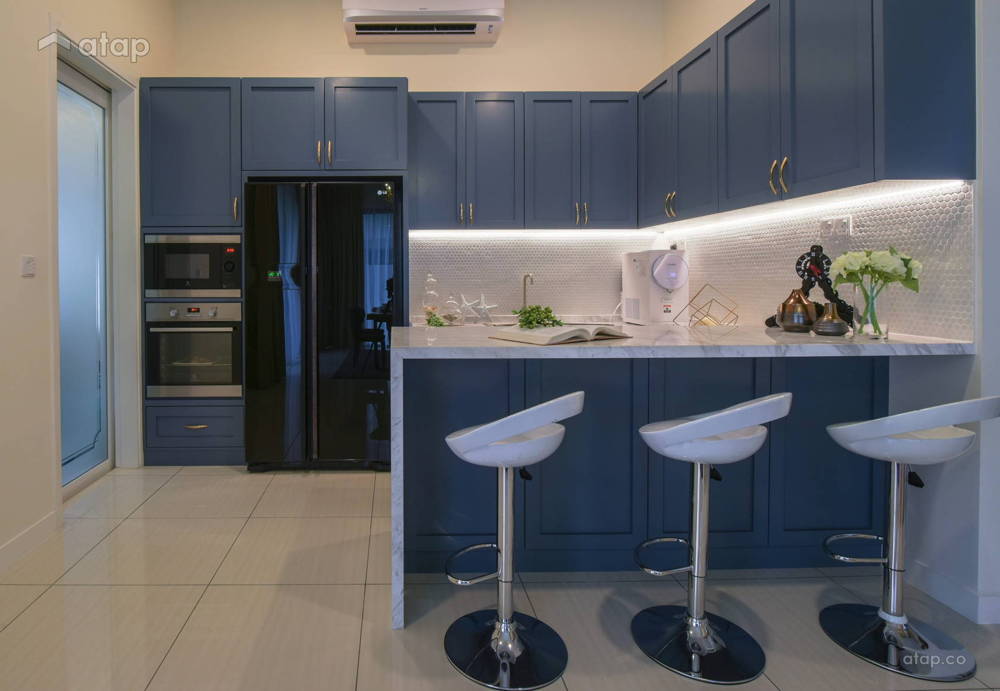 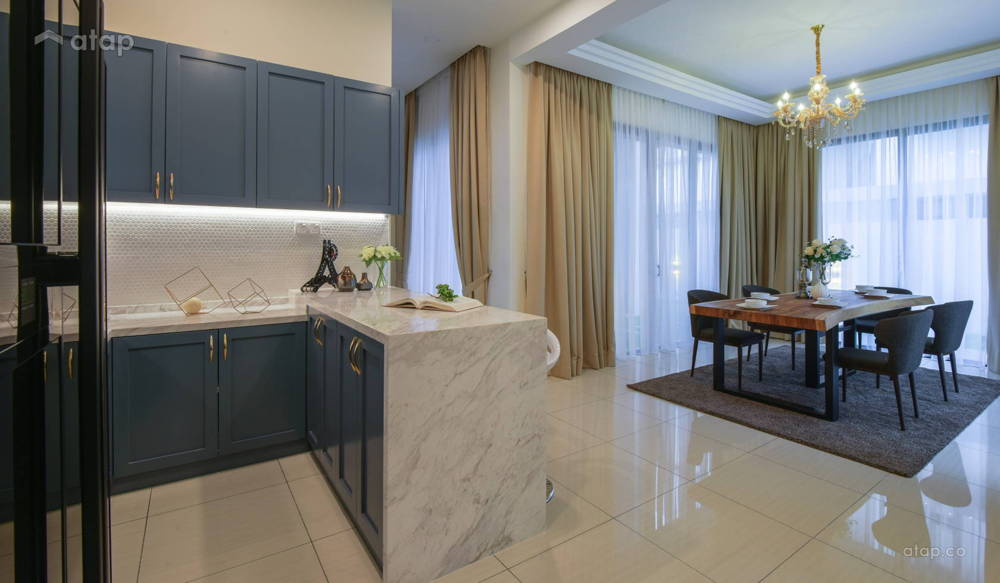 Just next to it, an industrial wooden dining table with iron legs are matched with mid-century seats as a chandelier marks the centre of the room. As every room is designed to suit its function and master, the home is not held to a singular style. The use of similar materials or colours from room to room brings them together while still letting them stand on their own. 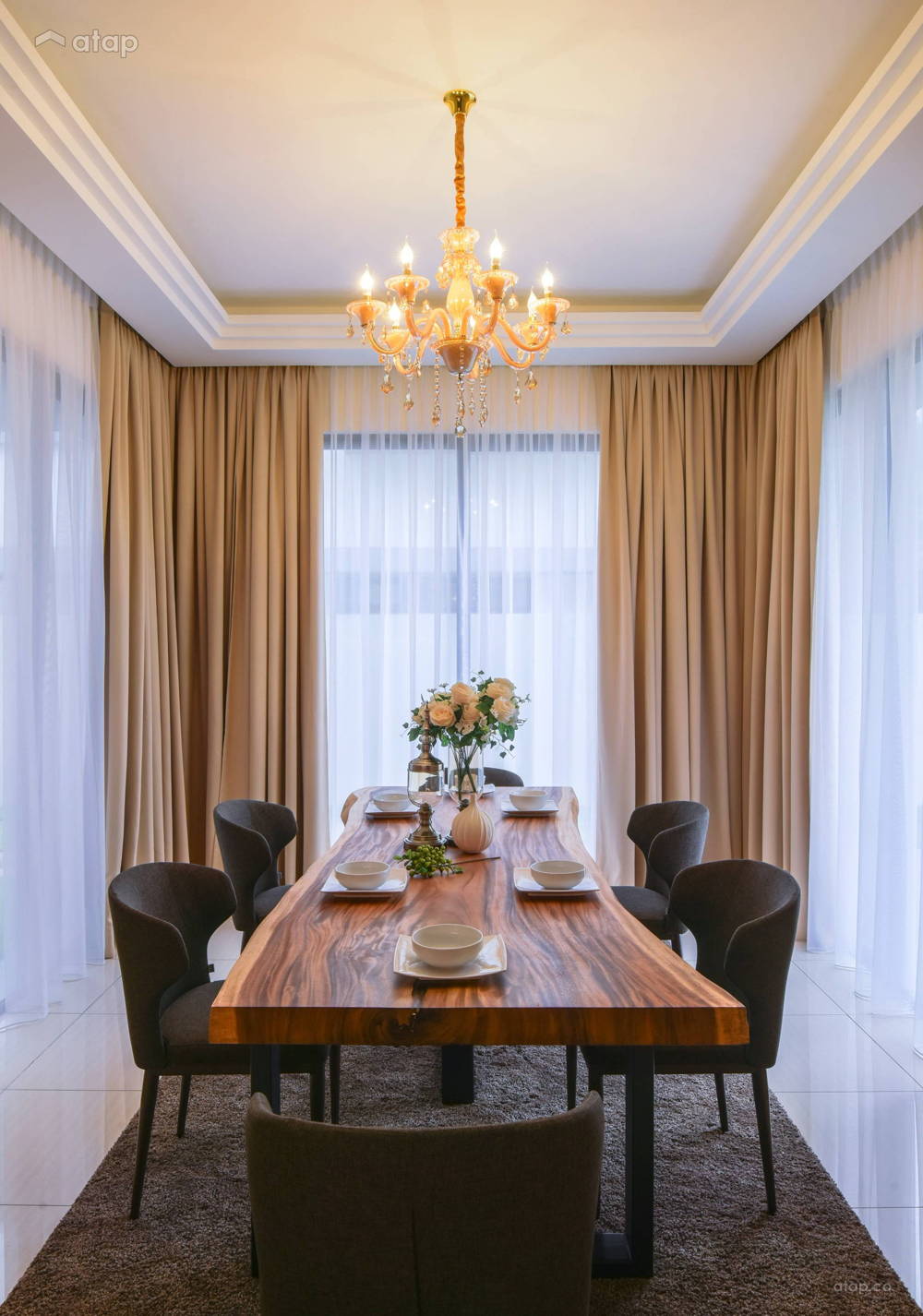 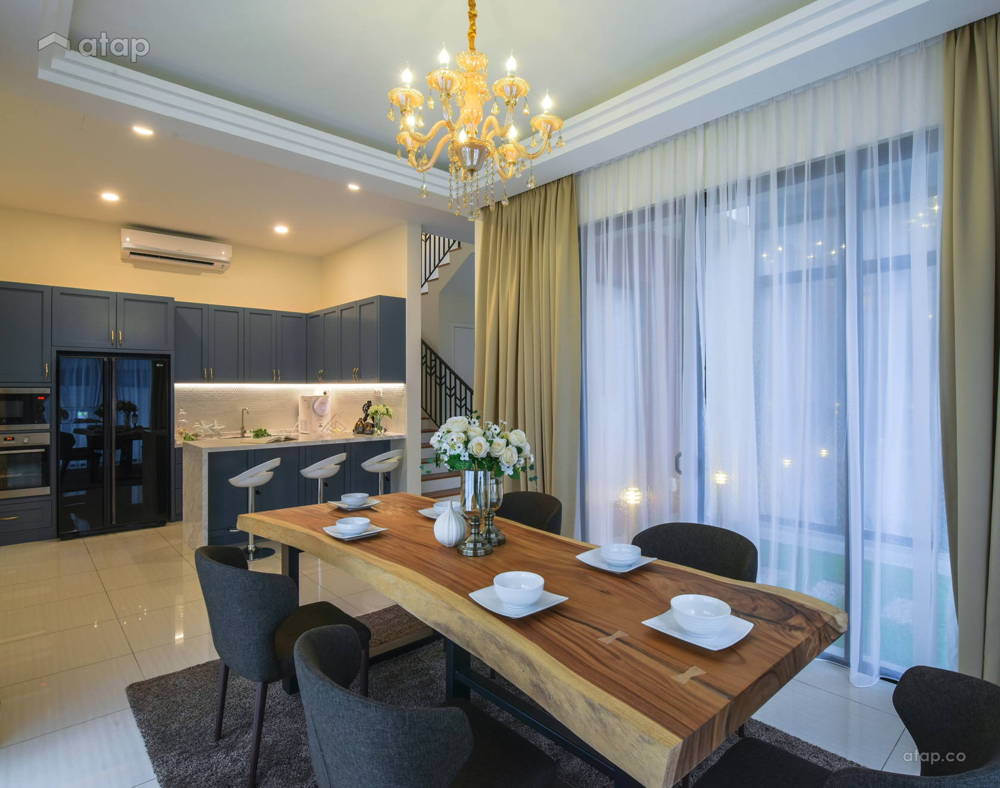 Yet another example of such masterful design planning is evident in the kids’ bedrooms which feature clean lines and a modern design. The designer describes them as blank canvases that the boys can customise as they grow up and develop their own style preferences. 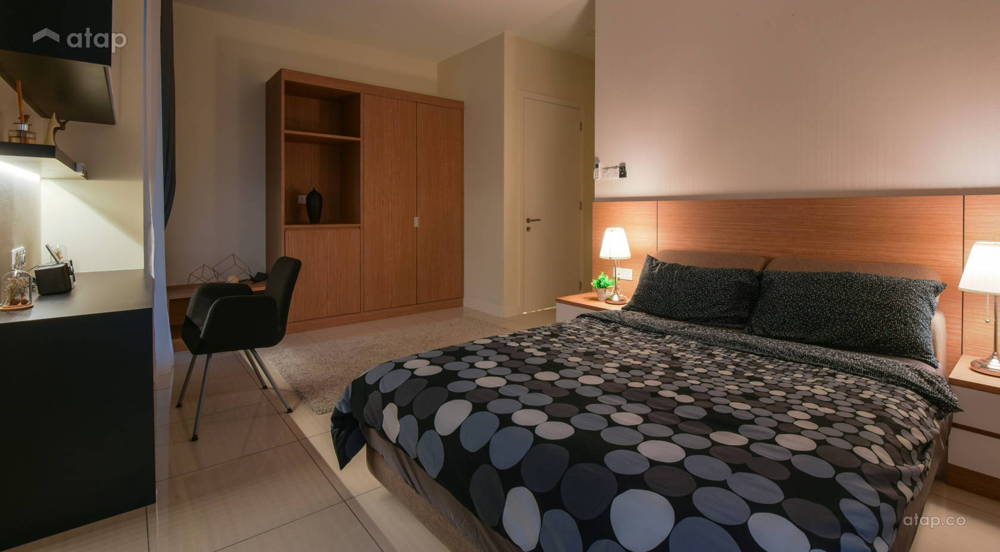 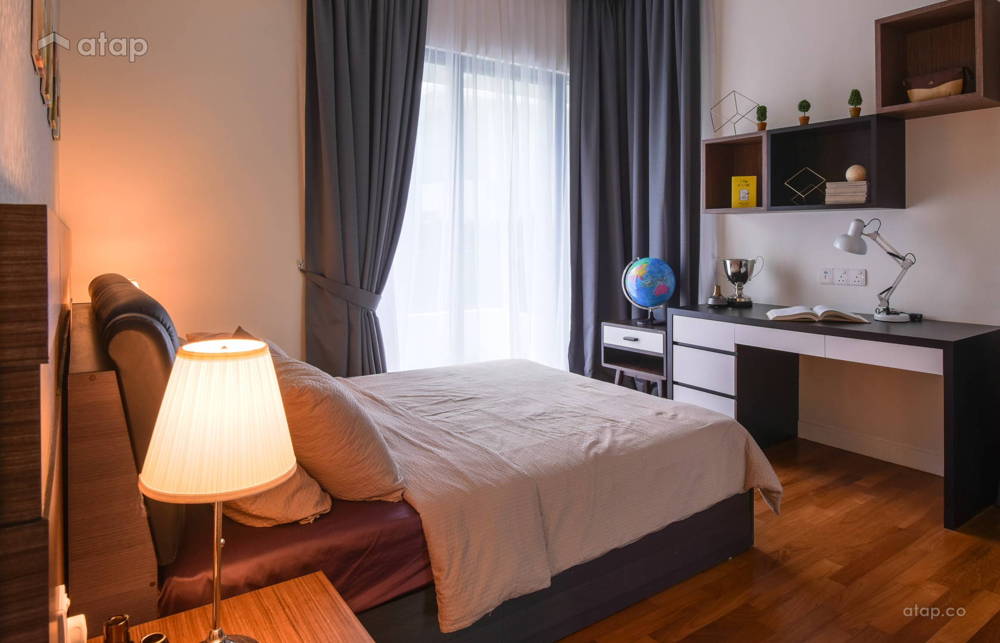 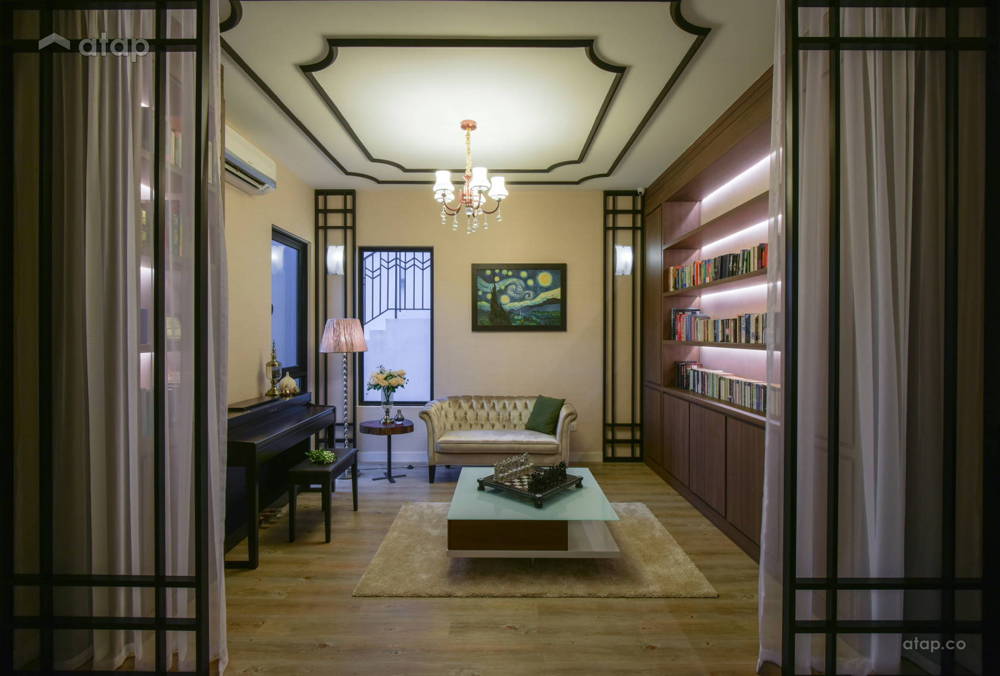 Making Use of Space

Designing a bungalow isn’t just making clever use of big spaces indoors, but also outdoors. The design is purposefully simple; the main attraction is a gazebo comprising outdoor chairs and a table, so the owners can hold BBQ sessions with guests. 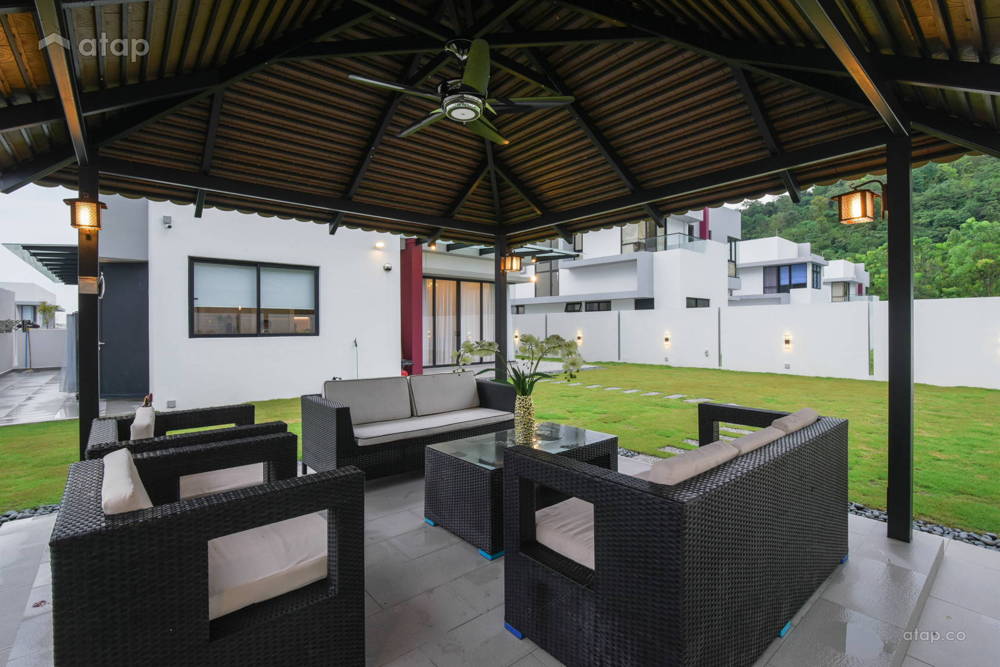 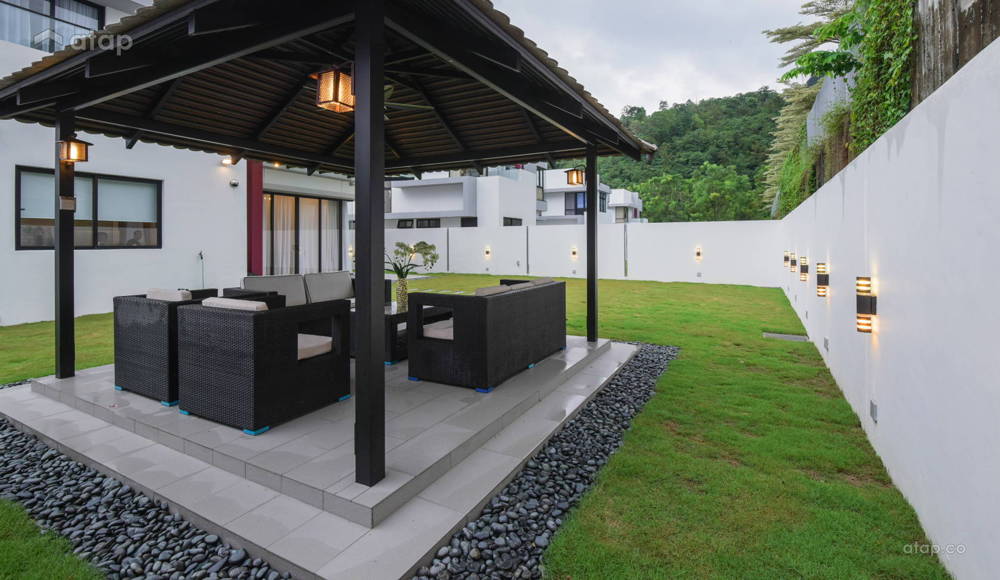 The rest of the compound is kept simple to make space for the children’s archery hobby. Clever use of space, we realised, is sometimes resisting to use all of it.

Clever use of space, we realised, is sometimes resisting to use all of it.

Take a look at other Moonlit Inspiration projects. You can also view designs from other Malaysian interior designers.
Want more ideas? Check out other local interior design portfolios.

This exquisite bungalow in Kuala Lumpur, Malaysia was inspired by the ornamental attributes of the art deco movement. We interview with Ameera Nabeela from Moonlit Inspiration, the brain behind this retro bungalow.