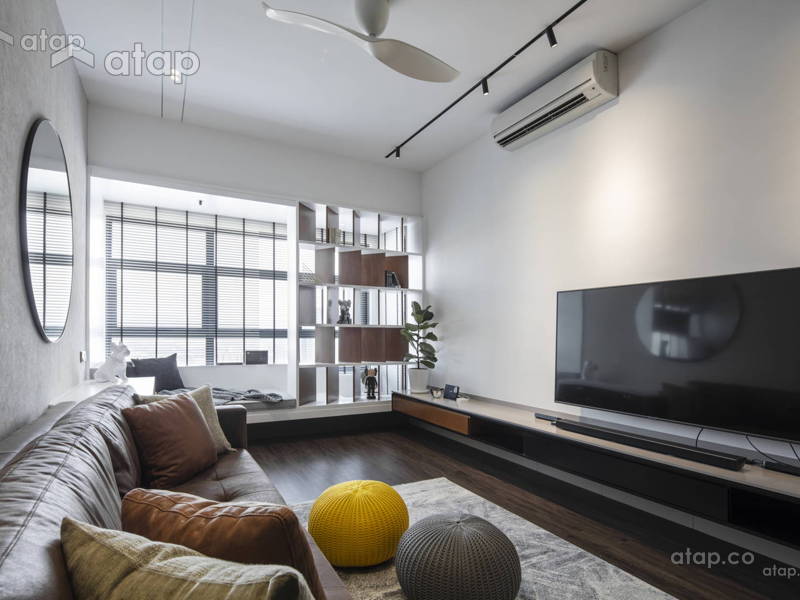 A Bright and Dreamy Bachelor Pad

by Lydia Lohshini on Oct 13, 2020
0
LOVE
Share on FacebookShare on TwitterShare on Google+Share on PinterestShare on Whatsapp

A perfect harmony of style and tech, this bachelor pad by WO Atelier is unlike any other. With limited time and space, the interior designers really outdid themselves. We spoke to Wayne Yap, the Director at WO Atelier, who took us on his journey through this project.

“The client that approached us is a young bachelor who wanted a home that reflected his lifestyle. Before we could begin our ideation process we had to first understand who our client is from his behaviour to his day to day living habits,” said Wayne. One major requirement was that the homeowner wanted to incorporate a brown leather sofa into urban interior design. To no surprise, these requirements were flawlessly executed and achieved. The brown leather sofa became the statement piece in the living room alongside matching pillow accessories. WO Atelier maintained the dark brown colour scheme with the other furniture and design elements within this space.

Located on the 28th floor with a large window space that overlooked a lake, the living room windows were the only source of natural light for the entire living and kitchen area. The client really liked that area and requested a daybed be placed in that space. Due to space constraints Wayne decided to ditch creating a dining room inplace of the daybed. The custom-made daybed platform was built to provide a comfortable seating area with a backrest and space to place books and drinks whilst enjoying the view. With remaining floor space, the interior designers created a dog bed for the homeowners furry friend.

In an effort to save space, WO Atelier designed a custom-made floating cabinet beside the daybed that had a swivel tabletop attached to it. This allows the homeowner to have a work desk and dining table that is easily tucked away when not in use. Wayne also noted that the homeowner is an avid reader and has amassed quite the collection of books so the WO Atelier team decided to design a one-of-a-kind bookshelf. This bookshelf also doubles as a divider allows sunlight to shine through. To achieve this, each wooden divider within the shelf was slanted at a different angle creating an eye catching statement piece.

The team paid close attention to every detail and aspect of this home. In fact, there’s even a specific reason as to why the wall behind the TV area was painted white. This was to incorporate the client’s smart lighting system. “The AI technology syncs the audio with the lighting set up, which bounces off well against the white wall. It also allows a fully immersive experience when the lights change colour,” explains Wayne. In fact, the team also installed built-in lights beneath the daybed platform and behind the TV.

Originally, the kitchen was part of the open layout of the unit but the team decided to extend the space to give way to an L-shaped glass divider that separates the kitchen from the living room. A simple sliding door is incorporated into the divider which also prevents cooking fumes from permeating through the entire unit. As for the kitchen cabinets, Wayne and his team spray-painted the cabinet doors blue and added a mirrored countertop backsplash to suit the overall theme and give the illusion of a bigger space.

According to Wayne, as blue is the homeowners favourite colour, it was chosen secondary feature colour for his home. “For me, blue isn’t a colour that most people would go for so I decided to take advantage of that and incorporate the colour into different spaces of his home for overall cohesive flow,” he added.This would explain the royal blue barn door that separates the bedroom from the rest of the other living areas. “We removed the existing bedroom door and converted the outer space of the bedroom into an added walk-in wardrobe space,” explained Wayne. This essentially means that once you slide open the barn door, you have to walk-through the added wardrobe space before entering the bedroom. The team came up with this idea because they felt that the bedroom lacked a proper dressing area. It was also a cost-saving initiative for their client without having to break down any walls or build a new space from scratch.

The bedroom interior had a minimalist style to it which exudes masculinity. The feature wall was created with wall coverings that were imported from Japan. This particular wall covering was used as it was ideal for bigger surfaces. Thin wooden bars were added to the lower half of the wall with the same wall covering wrapping around it. The existing cupboard was repurposed by replacing it with louvred doors and painting it the same shade of blue as the barn door and kitchen cabinets. The handles were also replaced to gold handles, matching the gold inlays on the wall to give a low profile lustrous look. Moreover, the linear lines created on the headboard matched the linear lines of the wardrobe to create a cohesive repetitive ambience.

With this project it becomes evident that these interior designers are able to transform spaces into personalised homes even with time and space constraints, proving that no project is too difficult for Wo Atelier to tackle.